Yesterday markets opened lower and fell through the day. All 4 indexes closed the day deep in the red.

Recession fears topped the negative sentiment as the IMF updated its 2023 forecast to “gloomy and more uncertain.”

Banks are raising interest rates, and that hampers growth.

The weakest sector was Consumer Discretionary (XLY), falling by more than 3%.

But there were still bring spots … Utilities (XLU), and Healthcare (XLV) both gained more than 0.5% each.

After the closing bell, more disappointing earnings were met with buying.

Futures are higher this morning. If they can hold their gains, yesterday’s drop will be erased.

But there are no guarantees…

All eyes are on the Fed today as the FOMC meeting will conclude with a rate hike at 2 pm, and then Fed Chair Powell will take the stage at 2:30 to discuss the decision.

Despite the decline in the indexes yesterday, the VIX has stayed relatively low and in check. 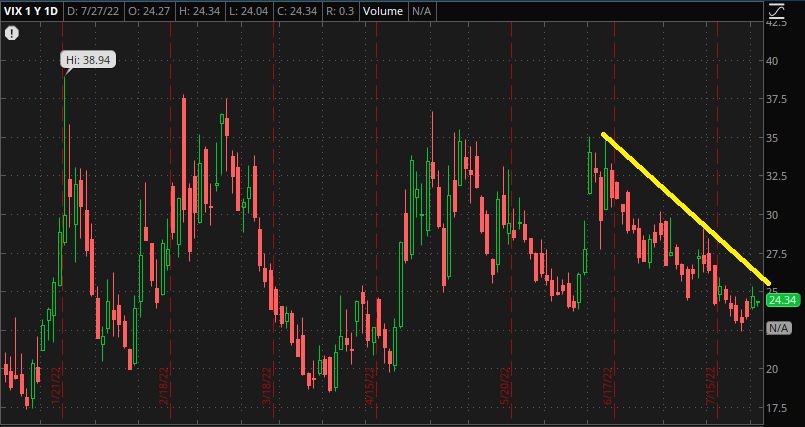 With the downtrend intact, I’m watching the 25 level closely. As long as we can stay below 25, the direction of least resistance remains bullish.

Today I’m not nearly as concerned about the open as I am about the close.

While the market will hang on every word that comes from the Fed today. Tomorrow’s GDP report has already become a viral sensation.