Yesterday markets opened deep in the red for a second day. But once again—closed near flat.

The sectors were divided, only 3 of 11 ended in the green.

While talking to reporters, the CFO downplayed the odds of a recession … Saying, “There is essentially no evidence of actual weakness.”

Photo by Jeremy Bishop from Pexels

The dollar continues to show strength against the euro. At writing, the two currencies are equal.

Shares of Pinterest (PINS) rose as much as 20% after hours when the Wall Street Journal reported that “activist investor Elliott Management” has acquired a 9% stake in the company.

Today I want to show you a 3-year VIX chart… 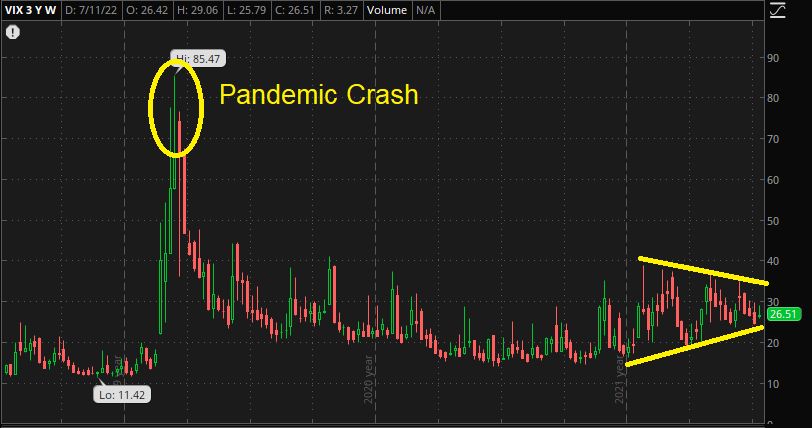 The range is narrowing and appears to be fading lower.

Despite the bear market, rate hikes, and recession fears, the VIX has remained in check.

A lower VIX favors the bulls.

Your take-home … The market is forward-looking. A recession is already priced in … if we avoid it, expect a rally.

At 10 am this morning, the Univ of Mich will release the latest consumer sentiment survey.

Today is also July’s options expiration … which could bring some fireworks near the close.

The next major date on our calendar is July 28th: