Markets ended their worst first half in 52 years yesterday.

The Nasdaq fell 3% in early trading. But buyers showed some resilience pushing stocks up off those early declines.

It showed that personal spending in May rose 6.3% year over year. The same as June.

MarketWatch described the reading best with this headline … “Raging U.S. inflation is starting to cool.”

Bitcoin^ has slipped below $20,000 and continues to trade below that critical support level.

On the surface, the crypto outlook looks bleak … But we see the consolidation as a healthy part of the industry’s growth.

We crunched the numbers and can tell you exactly when we expect the crypto carnage to end. Click here to read that article.

The indexes all fell below a recent support level yesterday. 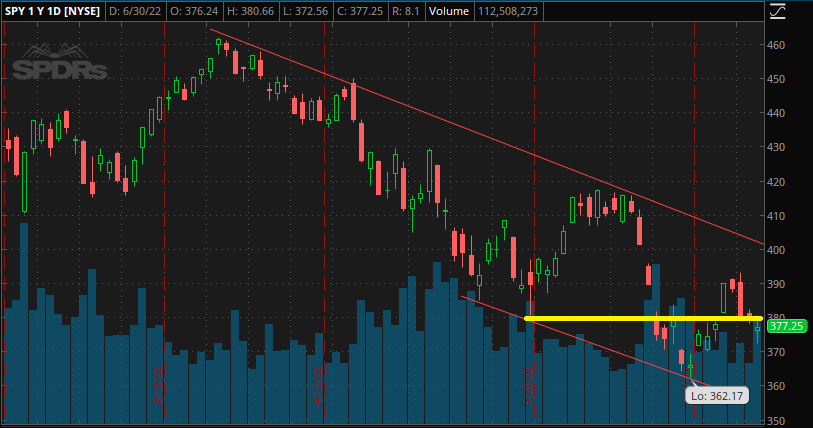 The put-to-call ratio snapped back to neutral, indicating that the bears may be getting less aggressive.

At writing, futures are trying to go positive.

I’m watching for a close above that yellow line for possible signs of bottoming.

Today is the first day of Q3 and marks the year’s halfway point.

Headlines have quickly pointed out that it’s the market’s worst start since 1970.

We’ve been comparing 2022 to 1970 since Russia invaded Ukraine in late February.

We still hold out hope for a positive second half. However, the rally may not begin until Q4.