Yesterday markets closed at their highs with the Nasdaq in the lead gaining 2.7%. The Dow brought up the rear with a gain of 1.3%.

OPEC+, a group of 24 small oil-producing countries, announced it would increase oil output faster than earlier agreed. The markets welcomed the news which comes on the heal of the EU’s Russian oil ban.

The increased supply was not enough to send crude oil prices lower. The price per barrel rose from about $115 to $117 during the trading session.

Energy stocks underperformed … the energy sector was the only sector to end the day red.

Consumer discretionary, Materials, Communications, and Technology all gained more than 2% on the day.

Microsoft (MSFT) lowered guidance for Q4, estimating its earnings would be 1+% lower than previously thought.

Shares of MSFT initially fell more than 2% but closed up 0.8%.

When stocks rally on bad news it’s a strong signal that the markets are bullish.

Today is the last day Amazon (AMZN) stock will trade at a non-split adjusted price. Monday its 20-to-1 stock split will go into effect. The current stock price points to the adjusted price near $125 per share.

The VIX, a measure of volatility in the market, dropped below 25 for the first time in 6 weeks.

The downtrend is another bullish indicator. 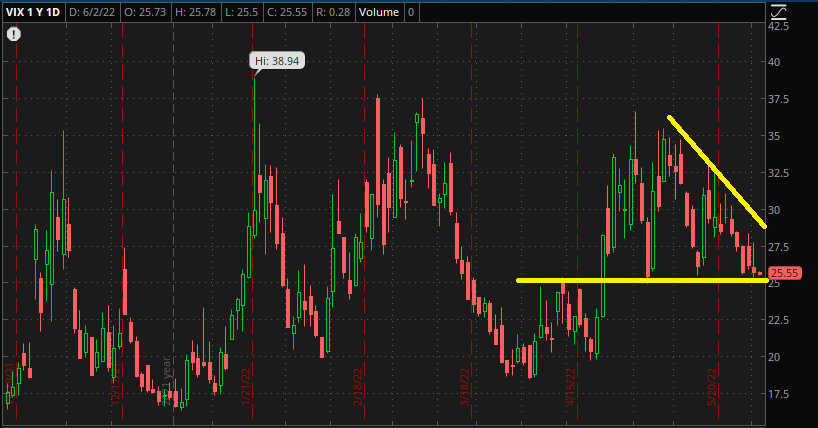 The markets are generally trending higher … But there’s still a ton of overhead resistance.

If the markets can close green today it will further solidify my assessment that the bottom is in.

Today is the last day of a short week. The latest jobs report is due out at 8:30 this morning.

The next FOMC meeting is less than two weeks away.

It’s still summer, so this week’s sideways action can be expected to continue.