The CPI report dropped Friday morning and roiled the markets.

Most notably, food prices are up over 10%.

After the news broke the markets tanked…

Over the weekend the national average price for a gallon of gas exceeded $5 for the first time ever, according to AAA.

Futures are pointing sharply lower this morning … The S&P 500 could enter an official bear market as soon as today.

The federal government has curved spending … According to a report from the office of management and budget, the federal deficit was just $66 billion in May.

That’s a 24% decrease from this time last year.

On Tesla (TSLA^) watch, the company officially filed paperwork for a 3-to-1 stock split on Friday. Shareholders will have the final say in an August vote.

The bears clearly have the upper hand at the moment.

A close below the yellow line will officially put the S&P 500 in a bear market. 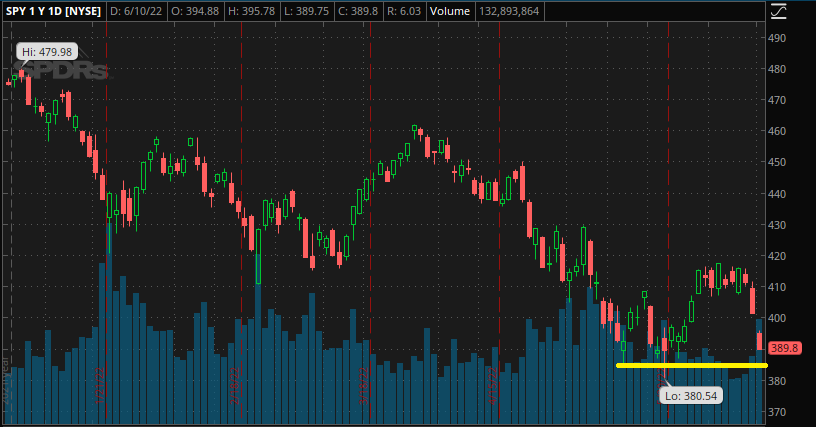 Futures are pointing to an open near $380 … a retest of last month’s low.

This week is the long-awaited FOMC meeting. It starts on Tuesday and ends on Wednesday.

A 50-basis-point hike is widely expected at the conclusion … But with the new hot inflation number, the market is pricing in the possibility of a 75-point hike.

Friday is the second triple witching of 2022…

And don’t forget it’s summer … I’m not expecting much bullish activity until Q4.