Markets snapped an 8-week losing streak at the close on Friday. Weekly gains for the major indexes came in extremely bullish between 6-7% each.

Technology and Consumer Discretionary were the day’s and week’s top sectors.

The top headline was once again … Inflation!

The April inflation measure, Core PCE, came in at 4.9% year over year, that’s down from the highest reading of 5.3% in February. This is a positive sign that inflation may have peaked and could be coming back down. —An explanation of PCE is at the bottom of this brief.

All said, inflation is high but it’s not stopping people from buying. They’re even willing to dip into savings to maintain their habits.

As the markets price this in, one trend I’m watching closely is lithium.

Stocks related to batteries and the production of lithium were among the top performers on Friday. Livent (LTHM) and Sigma Lithium (SGML) are on the watchlist.

I also have an open position in Solid Power (SLDP).

Finally, I’m keeping an eye on Bitcoin^ this morning. It jumped back above $30K yesterday, reaching its highest level in three weeks.

We showed you the Russell 2000’s breakout on Friday. Today you can clearly see that the Nasdaq followed suit. 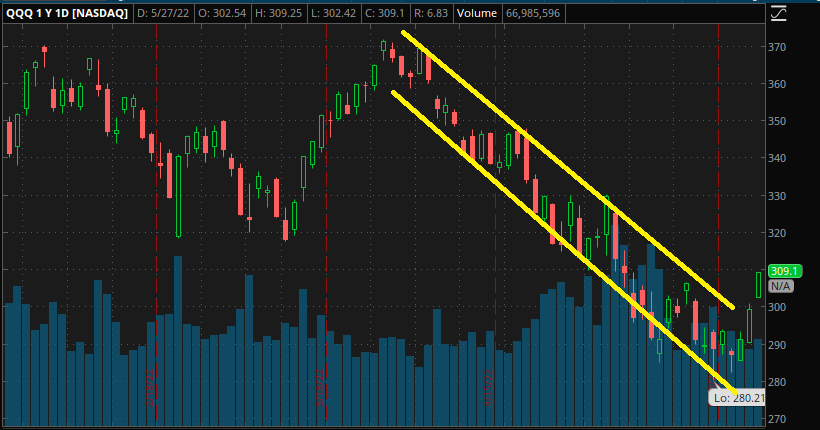 The nasty downtrend that gripped the technology-heavy index since it double topped in late March was snapped.

The VIX is nearing support at 25. The lower it goes the better for the bulls.

At the moment, all the other indicators we track are neutral.

With plenty of overhead resistance still in play … Let’s look at what June has in store for the markets.

On average, the Dow Jones performs poorly in June. Of the 12 months in a year, June comes in 11th place (September is the worst).

But for the Nasdaq, it’s the 6th best.

What Is Core PCE?

PCE which stands for “personal consumption expenditures” is the preferred measure of inflation for the Federal Reserve.

You’ll often see CPI make headlines. CPI is the “Consumer Price Index” which is a measure of the cost of a basket of about 100,000 items. But CPI doesn’t capture the full picture of household spending because it fails to account for substitutions.

For example, if the price of steak rises households may opt to eat more chicken. CPI would capture the cost in the increased price of steak.

But CPE shows us that households are making substitutions. Instead of buying the more expensive steaks, they opt for chicken, avoiding the price increase on steak.

CPE accounts for all household spending. “Core” CPE removes the cost of food and energy.