The Federal Reserve released the minutes from its May FOMC meeting yesterday.

The document was well-received by the market as all major indexes closed well into the green and near their respective highs of the day.

The Russell 2000 was the day’s top performer with an advance of 2%. The Dow underperformed with a gain of 0.6%.

The document revealed that all members believe the U.S. economy is strong. And that additional “50 basis point increases … would likely be appropriate at the next couple of meetings.”

The strongest sector was Consumer Discretionary with Energy coming in a close second.

DICK’S Sporting Goods (DKS) was the star of the day, it opened down more than 10% after releasing earnings. But it rallied to end the day up by nearly 10%.

Meme stocks made a decent showing as well with GameStop (GME) climbing nearly 30%.

According to a report from Reuters, “despite market turbulence” retail investors (you and me) are still buying stocks. About $76 billion worth in the past three months.

When the market rallies off of intraday lows it indicates that buyers have the wind in their sails and are trying to push the market higher.

We’ve already seen several short-term bull rallies after such rallies as noted on the chart below. 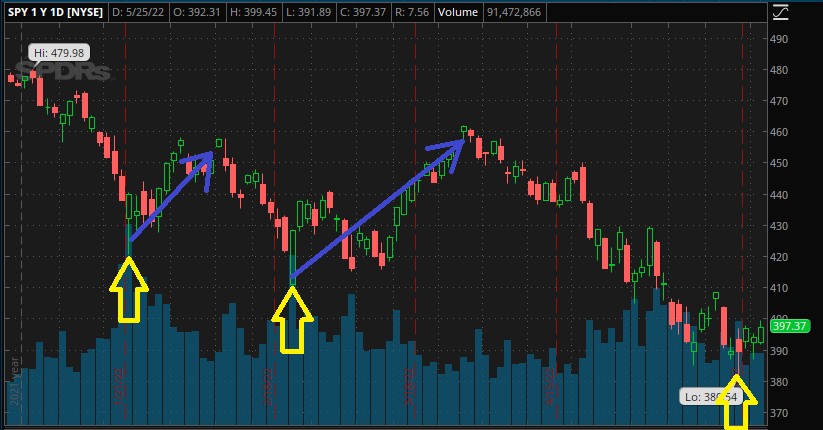 The put-to-call ratio has returned to neutral. RSI levels remain neutral as well.

The VIX remains high but is pointing lower.

All good signs for the bulls.

With 73% of stock advancing yesterday, my conclusion remains the same. The bottom is in.

The only thing holding the markets back from an extreme bull rally is the timing.

Unfortunately for the bulls, summer is for the bears. So the rally I want may not happen until Q4.

I believe this is the time to buy your favorite beaten-down stocks.

I still like The Glimpse Group (VRAR) and Beam Global (BEEM).

The three-day Memorial Day holiday weekend is set to kick off after the close tomorrow. Expect low volume ahead of the weekend.