Markets declined sharply at the open yesterday. The Nasdaq fell almost 4% in the first hour of trading.

But things looked different by the close. The Nasdaq was the worst performer ending the day down 2.3%, while the Dow managed to eke out a small gain of 0.2%.

No specific catalyst caused the sell-off or the bounce.

The top sectors were Utilities and Consumer Staples.

Another mass shooting, this one in Texas, claimed the lives of at least 20 people. While the shooting is tragic there has been no immediate market reaction.

After testing last week’s lows again, the market closed well of the lows for a second day. You can see two long lower shadows on the candles in the chart below.

The chart is indicating that buyers a getting more aggressive at these levels.

The higher low is not a definitive sign of a bottom but offers some encouragement to the market. 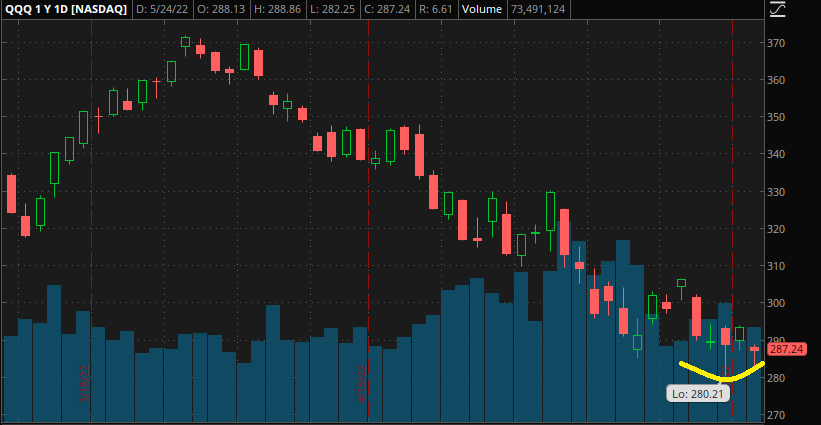 The VIX is still relatively high so don’t expect and smooth ride until we can return to a level near 20.

But my other indicators remain neutral. With evidence growing for my bullish stance, I’m deploying any remaining cash in the coming week or two on my favorite stocks.

Summer is for the bears.

While all technical indicators are showing signs of a bottom the market doesn’t like to rally that strongly in the summer trading months (May through October).

So while I’m generally bullish I’m prepared to hold my positions for a longer time period.

Futures slipped from green to red while I wrote this. The choppiness continues…