Markets went back into freefall mode yesterday. The overhead resistance we pointed out ended up being a turning point.

The Nasdaq fell 4.7% in what Jim Cramer described as “one of THE WORST days i can recall in years.”

The biggest loser was Target (TGT) falling 25% after a big earnings miss. Its biggest challenge is supply chain issues.

The market slump is causing Melvin Capital to shut down. Melvin’s been described as “one of Wall Street’s most successful hedge funds” but ended up losing billions in the Gamestop (GME) short squeeze of early 2021.

Tesla (TSLA^) was removed from the S&P 500 ESG index. The reasons provided include “claims of racial discrimination and poor working conditions” and Tesla’s “handling of the NHTSA investigation after multiple deaths and injuries were linked to its autopilot.”

Elon Musk took to Twitter to point out that Exxon (XOM) was still on the list and called ESG “a scam.”

“ESG stands for Environmental, Social, and Governance.” It’s a grouping of “non-financial factors” used “to identify material risks and growth opportunities” according to the CFA Institute.

Musk also said he has decided to abandon the Democrats calling them “the party of division & hate.” and will now “vote Republican” despite his difference in opinions on climate change…

In contrast, the last formal Republican platform said “Climate change is far from this nation’s most pressing national security issue.”

Markets are gapping down this morning and could be testing last week’s lows at the open.

The VIX is moving up again, a break through 35 is possible again. 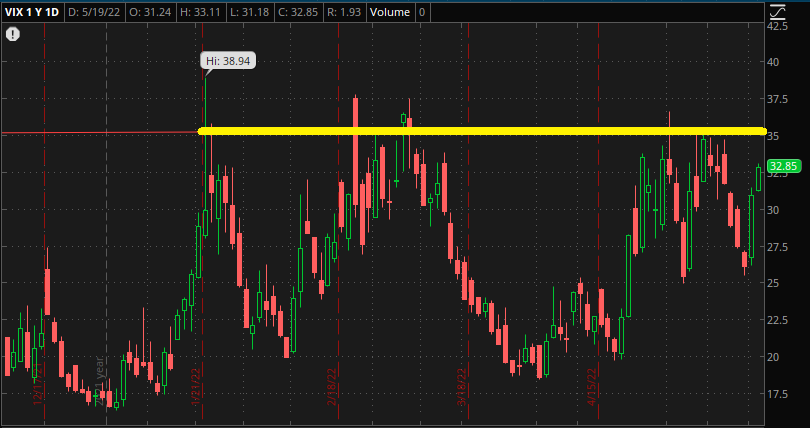 RSI levels are neutral and the put-to-call ratio is extremely oversold.

While it’s always possible the market can move lower my view, that the bottom is near, remains intact.

It’s summer trading in a mid-term year. I’ll leave you with the same summary as yesterday…

The number one goal for investors right now … survive long enough to enjoy the Q4 rally.