Stocks rallied again yesterday. The Russell 2000 led the way higher with a gain of 3.2%, the Dow gained the least ticking up just 1.3%.

Consumer staples was the only sector to finish the red. It was held down by Walmart (WMT) which declined 11% after disappointing earnings and guidance.

As Russia’s war in Ukraine prepares to enter a fourth month Finland and Sweden have officially applied for NATO membership. The move ends a decades-long tradition of neutrality for the nordic nations.

I see the move as mostly symbolic. It’s a poke in the eye for Russia.

With the current conflict progressing so poorly Russia doesn’t have the resources to attempt to deter the application process.

Fed Chair Powell commented that slowing inflation may require “some pain” and that the Fed has the “resolve” to make it happen. His comments made headlines but provided no new information for the market.

The S&P 500 is approaching some resistance as shown in the chart below. 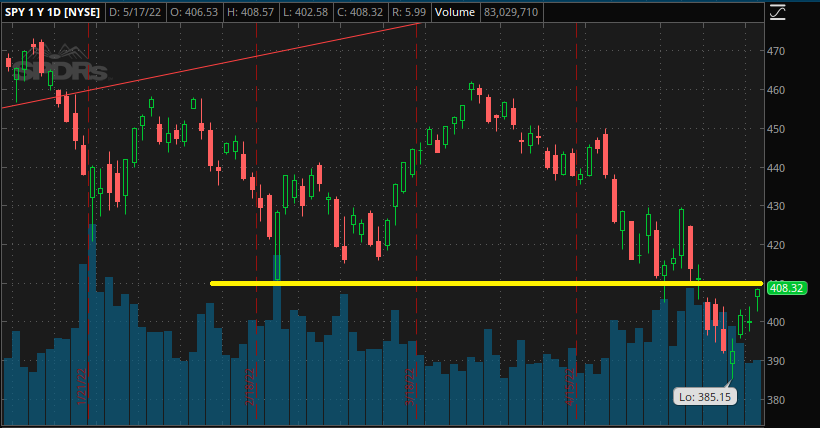 Most indicators remain neutral. The current rally could continue but don’t expect a clean ride.

Despite the decrease in volatility, the VIX is far from providing a truly bullish signal.

Today I want to give you a long-term outlook.

During the four-year presidential election cycle, there is a known weak spot that lasts about six months.

The ensuing rally into the pre-election year is typically the strongest rally of the four-year cycle. As illustrated in the chart below.

I’ve marked the current month with a red arrow.

The number one goal for investors right now … survive long enough to enjoy the Q4 rally.