After a wild ride, with intraday swings of +1% to -2%, the top three indexes closed near flat.

The Russell 2000 closed up 1.2% and the communications sector, which has been the worst performer for weeks, was the best performer. This is known as “sector rotation” and it’s reason #1.

During the swings yesterday the S&P 500 flirted with official bear market status. The Russell 2000 and Nasdaq are already there.

The inflation levels from the PPI were in line with expectations. Inflation is still unsustainably high…

And in a rare bipartisan moment, Trump appointee Jerome Powell was reconfirmed for a second 4-year term by the Senate by a vote of 80-19.

Late addition: On Twitter (TWTR^) watch, Elon Musk has put the deal “on hold.” I doubted Hindenberg but they hit the nail on the head. Shares are down about 20% at writing.

Reason #2: the VIX is retreating from resistance at 35.

Reason #3: the market is extremely oversold. 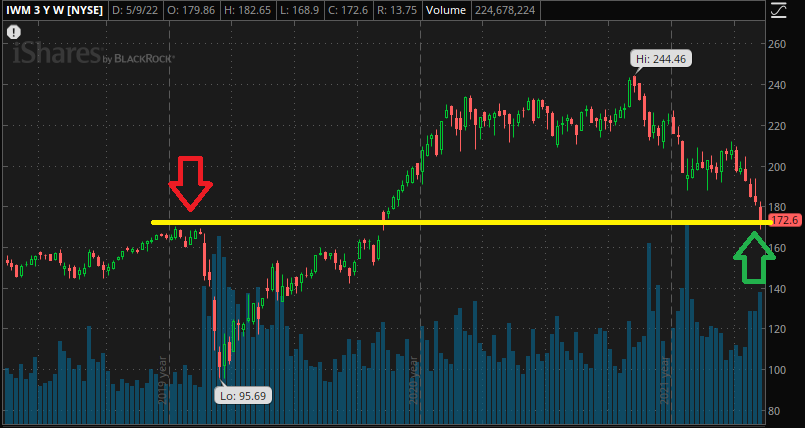 The following charts show the percent of stocks trading above their 50-day and 200-day moving averages respectively.

As you can see we’ve reached levels that have rarely been seen. And never been maintained.

The rubber band is stretched as far as it can go…

With months of summer trading ahead there may be multiple opportunities to buy the dip.

A typical midterm year will bottom out in the summer ahead of the elections.

As far as I’m concerned the bottom is in. I’m just not convinced the market is ready to turn. Sideways price action is always an option.